Interesting and unusual tubercles, varying from frosted to zebra-banded on one plant or leaf. Rather slow growing compared to the other H. attenuata forms.

Plant size: Well established plant, the plant is in a 7,5 cm pot. 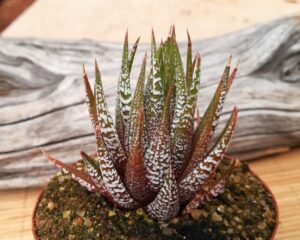 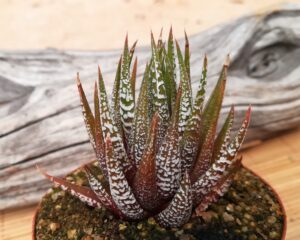 Haworthiopsis is a small sized genus of mainly South African plants. They are leaf succulents, forming very attractive rosettes of often textured, marked or tuberculated leaves. The number of species vary considerably, depending on the taxonomist and author. The species of this genus was formerly included in the subgenus Hexangulares of Haworthia. The genus is widespread and predominately found in the Eastern and Western Cape provinces but is also known from the Northern Cape, KwaZulu-Natal to Mpumalanga. It is a nearly endemic genus to South Africa, except for a few records known from Namibia and Swaziland.

Pot: Haworthiopsis is well suited to cultivation in containers. Some species are also well suited to a protected spot in the rockery in frost free areas.

Light: The brighter the light the more colourful and compact your plant will be. However Haworthiopsis can also tolerate shaded positions.

Water: Let your plants soil dry out for a few days between watering. Rather underwater than over-water to avoid root-loss.