This species is considered synonymous with H. mutica, but is rather distinct from this species. The plants appear to be somewhat intermediate between H. mutica and a prolific H. turgida-like element.

Plant size: Well established plant, the plant is in a 8 cm pot. 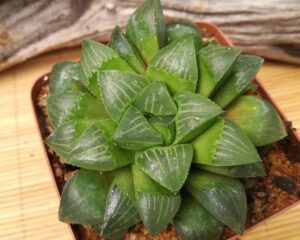 Pot: Most Haworthia hybrids are best suited to cultivation in containers.