This lovely compact form is the most eastern distribution for the genus Haworthia. Here it is found in the same habitat as Aloe reynoldsii, Huernia pendula and Haworthiopsis attenuata var. glabrata. The plants are at home here on steep ledges or cliff faces. This form has been named Haworthia sarcoidea by Dr. Hayashi.

Plant Size: Plants about 4 to 5 cm in diameter are offered. 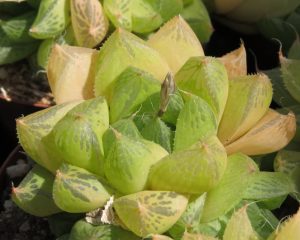