A rare find of a yellow flowering Gasteria. Known as the Klein Karoo Ox Tongue, this species is mainly found in the Little Karoo.  Yellow flowering plants are rarely found. This is a lovely plant with spotted leaves.

Plant size: Well established propagations, about 8 cm from tip to tip are offered. 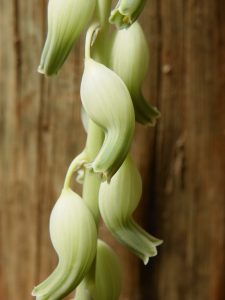 Gasteria is a small genus of easy-growing Southern African plants, commonly known as "beestong" (Afrikaans) which translates to Ox Tongue, for its rough textured strap-shaped leaves, this is especially a character of Gasteria batesiana. There are about 25 recognised species and are predominantly found in the Eastern Cape and Western Cape, but also known from the Northern Cape, KwaZulu-Natal and Mpumalanga. The genus is nearly endemic to South Africa, but is also recorded from Namibia and Swaziland.