Received from Cok Grootsholten in Holland many years ago. Despite of the name Variegata, which it is circulating with, it is not truly variegated, but instead it has a very unusual leaf colouration not seen in G. batesiana. 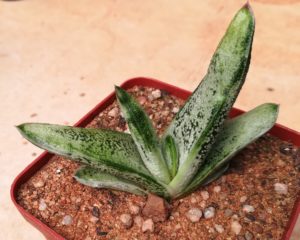 Gasteria is a small genus of easy-growing Southern African plants, commonly known as "beestong" (Afrikaans) which translates to Ox Tongue, for its rough textured strap-shaped leaves, this is especially a character of Gasteria batesiana.

There are about 25 recognised species and are predominantly found in the Eastern Cape and Western Cape, but also known from the Northern Cape, KwaZulu-Natal and Mpumalanga. The genus is nearly endemic to South Africa, but is also recorded from Namibia and Swaziland.